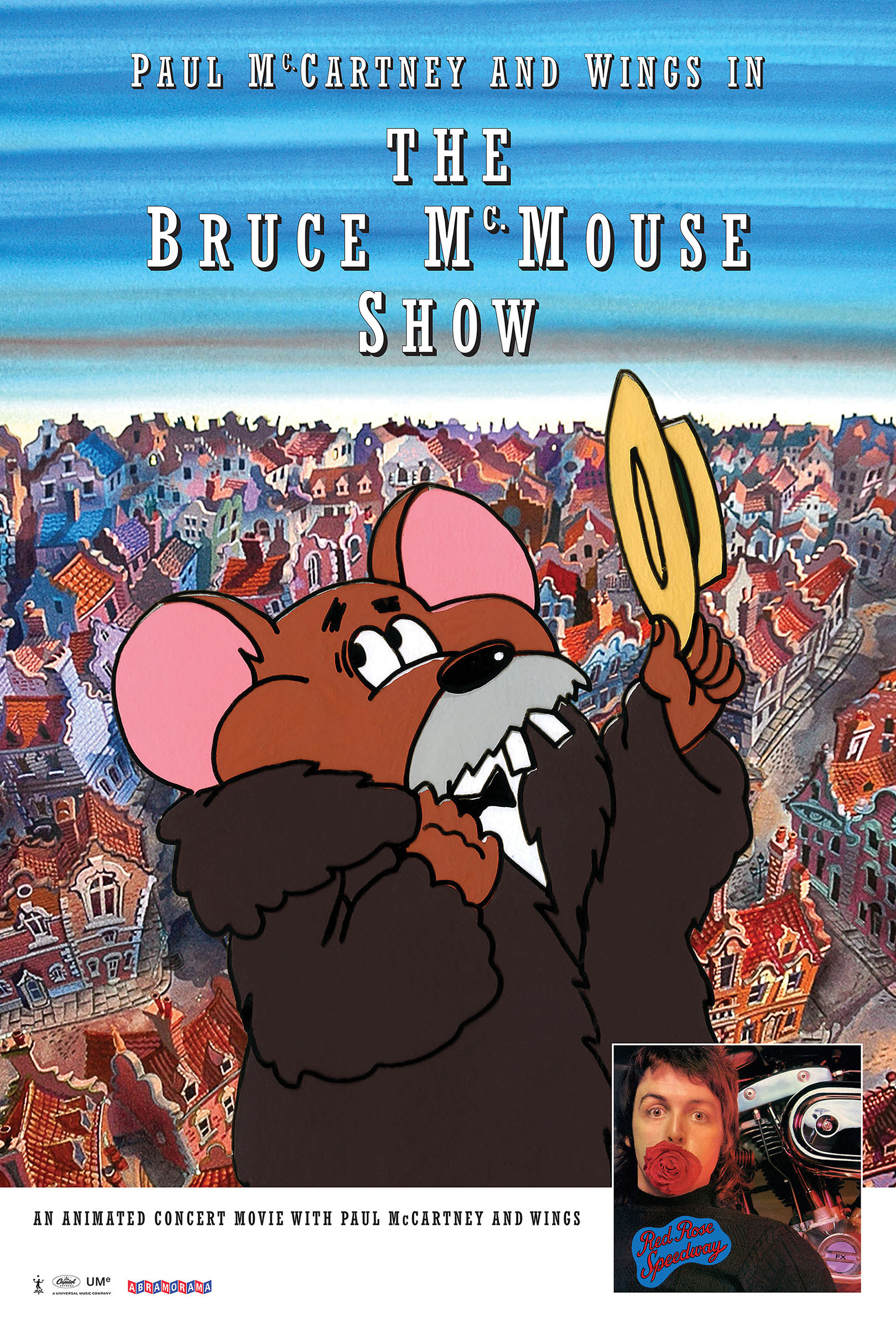 After opening the film with ‘Big Barn Bed’ – the camera takes us down through the floorboards into this charming animated world. We see Bruce McMouse regale his children with stories from his past, when son Soily rushes into the room in a whirlwind of excitement announcing that “The Wings” are playing above them. As the concert plays on, Bruce declares to his wife Yvonne that Paul and the band need his help. Bruce then proceeds to venture on stage to offers his services as producer. As the concert progresses, the animated scenes culminate with dozens of animated mice flocking to the venue to see Wings play. ‘The Bruce McMouse Show’ has been fully restored in 2018 at Final Frame Post alongside a brand-new audio mix (stereo and 5.1) created at AIR Studios where it was also mastered.

The film was directed by Barry Chattington and produced by Roger Cherrill with the live elements taken from four shows in The Netherlands and Germany in 1972. Paul viewed the initial concert edit and realized there was great potential in the material captured. Prior to the European tour Paul had the idea of a family of mice and sketched the characters. Picking up the idea, Eric Wylam took Paul’s sketches and created the final McMouse family. This storyline was incorporated and used as a linking theme within the concert footage. The voice-overs for the animated mice took place at the end of 1973, recorded by Paul and Linda McCartney, Deryck Guyler, Pat Coombs and Derek Nimmo. Production stretched from 1972 through to 1977 when the film was complete, however with changes in the band’s line-up and music scene, the project was held in the MPL archives.

Evan Saxon, Head of West Coast Acquisitions and Business Development at Abramorama stated, “There’s no greater compliment than to be entrusted to oversee the global release a Paul McCartney film and continue our long-standing relationship with The Beatles family.  Fans attending these special screenings of The Bruce McMouse Show will be transported to a Paul McCartney & Wings concert with the best seat in the house, just above Bruce McMouse and his family.”

For tickets and information www.BruceMcMouse.com

Cinemas where The Bruce McMouse Show is screening:

Paul McCartney and Wings, Red Rose Speedway, a six-disc (3CD, 2DVD + 1Blu-ray) numbered limited deluxe edition of the second Wings album was released December 7th.  Originally released in April 1973 and featuring the #1 single ‘My Love,’ Red Rose Speedway was the first Wings album to hit #1 on the U.S. chart. The Red Rose Speedway limited deluxe edition features three discs of audio including the original album remastered at Abbey Road, no less than 35 bonus audio tracks, including a reconstruction of the originally conceived double album version of Red Rose Speedway, singles, B-sides, alternate mixes and previously unreleased tracks. The 2DVD + Blu-ray portions of the deluxe are packed with rare and previously unseen footage, including the James Paul McCartney TV Special, interviews and music videos, as well as the never before seen film The Bruce McMouse Show—fully restored and remixed in stereo and 5.1 surround sound. The package includes a folio containing 14 replica hand drawn original character sketches by Paul and facsimile dialogue sheets for the film, a 128-page book containing many previously unpublished images by Linda McCartney, expanded album and single artwork from the archives and story behind the album — including new interviews with Paul McCartney, and key album personnel — and track-by-track information, written by Amanda Petrusich, five replica handwritten lyric sheets and photo print, a 64-page ‘Wings In Morocco’ photo book, all housed in a numbered outer slipcase. The Red Rose Speedway download redemption card will provide access to all audio in HD 24/96kHz unlimited high-resolution versions.

About Abramorama
Abramorama is the preeminent global rights management partner for music films today and is recognized for the consistent high quality of its work on award winning feature films. An innovator in the focused, personalized form of film distribution and event cinema, Abramorama provides invaluable alternatives to filmmakers and content owners. An industry leader in marketing, promotion, and global distribution, Abramorama continues to trail-blaze exciting new pathways for filmmakers to find their audience.